Digital Payment Firms Cash in on India’s Money Mess, but Can It Last? Digital payment providers in India have mobilised hundreds of extra workers to enroll small merchants and offered their services for free, betting that severe cash shortages will prove to be the opportunity of a lifetime.
Signing people up, however, may be the easy part.
Getting shops and customers to change their reliance on cash permanently will involve convincing people like Mohammad Javed, a 36-year-old meat shop owner in New Delhi.
Working out of a bustling market in the capital, he is surrounded by banks and ATM machines, but says he does not know how to use a credit card machine, let alone a mobile wallet.
He says business has dropped since Prime Minister Narendra Modi’s shock move on November 8 to ditch higher value banknotes, but Javed does not believe mobile app providers offer a solution to his problem – or to his customers.
(Also see: Paytm Resumes PoS Service; Rules Out Rate War at Payments Bank)

Javed’s reluctance is a reality check for the likes of Paytm and smaller rival MobiKwik, which have gone into promotional overdrive since Modi’s announcement.
The prime minister, whose government supports digital payments, brought in demonetisation to crack down on the shadow economy and improve tax collection.
“Why should India not make a beginning in creating a ‘less-cash society?’,” he said on Sunday, “Once we embark on our journey to create a ‘less-cash society’, the goal of ‘cashless society’ will not remain very far.”
Promising signs
The companies say results have been promising so far.
Paytm, backed by Chinese Internet giant Alibaba Group Holding Ltd
The company, which has 4,500 full-time employees, plans to double the number of agents to more than 10,000, as it aggressively expands its network.
It says it has nearly doubled the number of small merchants signed up to its services to 1.5 million in the last few weeks and added eight million clients to the 150 million it had before the banknote ban.
MobiKwik, whose backers include US venture capital firm Sequoia Capital and American Express
Merchants on its platform have risen to 250,000 from 150,000 previously, and chief executive Bipin Preet Singh said they were aiming for a million in up to two months. It has added 5 million accounts since November 8, bringing the total to 40 million.
But challenges loom. 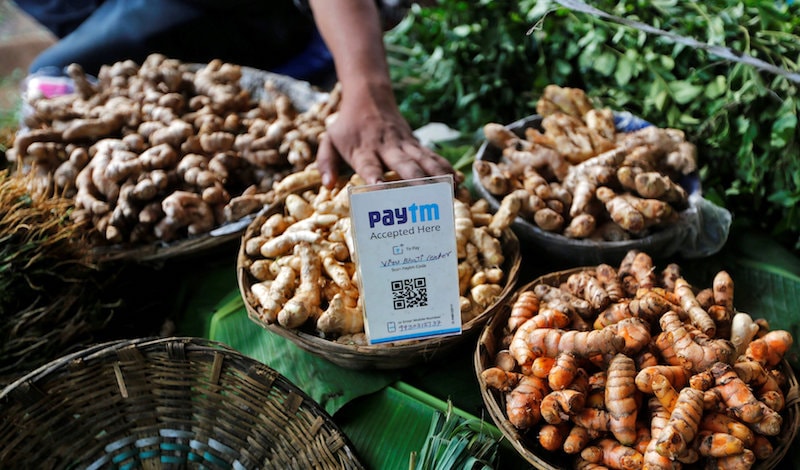 Credit Suisse estimates more than 90 percent of consumer purchases are made in cash, as millions still do not have bank accounts. Those who do have bank cards mainly use them to withdraw from cash machines.
Sales of cheap smartphones have boomed in recent years, but internet networks remain patchy, especially in rural India. Financial literacy and technology usage also remain low.
Dillip Kumar Agrahari, a vegetable seller in a Mumbai suburb, recently signed up to Paytm but does not know how to operate a smartphone.
He hopes switching to digital payments will improve his business as the cash crunch drags on, but says he will have to depend on a cousin to help with accounts.
Many businesses have traditionally opted for cash transactions because they are hard for the tax man to trace, given sales taxes are typically at least 10 percent.
Mangal Singh, a furniture store owner, said nearly 80 percent of his business was transacted in cash, even though he accepts credit card payments.
“We are working on wafer-thin margins,” he said. “If we are asked to pay 12.5 percent tax and other charges, we will have to close down our shops.”
Concerns also remain about the infrastructure for mobile payments, as customers or merchants from one platform cannot transfer payments to another.
MobiKwik said it had started offering wallet-to-wallet transfers, though not all rivals were on board.
(Also see: MobiKwik Lite Is Optimised for EDGE and Weighs Under 1MB)
When will profits come?
The challenges raise questions about whether the business models of mobile payments providers are sustainable.
Paytm recently slashed fees until December 31, from a system of fees that ranged from 1 to 4 percent, with the most lucrative coming from telephone and utility bill payments.
MobiKwik is not charging fees until March 2017.
The closely-held companies are loss-making.
Paytm Chief Executive Vijay Shekhar Sharma said the company expected to reach profitability in two years, without giving details. MobiKwik’s co-founder Upasana Taku said they hoped to become profitable in mid-2018.
(Also see: Paytm ‘Is as Indian as Maruti’, CEO Sharma on Chinese Funding)
Fitch Ratings believes that once the cash crunch subsides, some merchants and customers will go back to business as usual, using notes to pay for transactions.
“I would expect some amount of behavioural changes,” said Fitch analyst Saswata Guha. “We’re still not sure if this shock per se is incentive enough for them to completely change the way they do things.”
2016-11-29
+Imran Alam
Share

Imran is a tech geek who spends half of his day reading and writing about tech. While the nights are spent on shooting or editing YouTube videos. Feel free to geek out with him on-
@learningjuction
Previous Best Phones Under Rs. 15,000 [September 2016]
Next Lenovo K6 Power